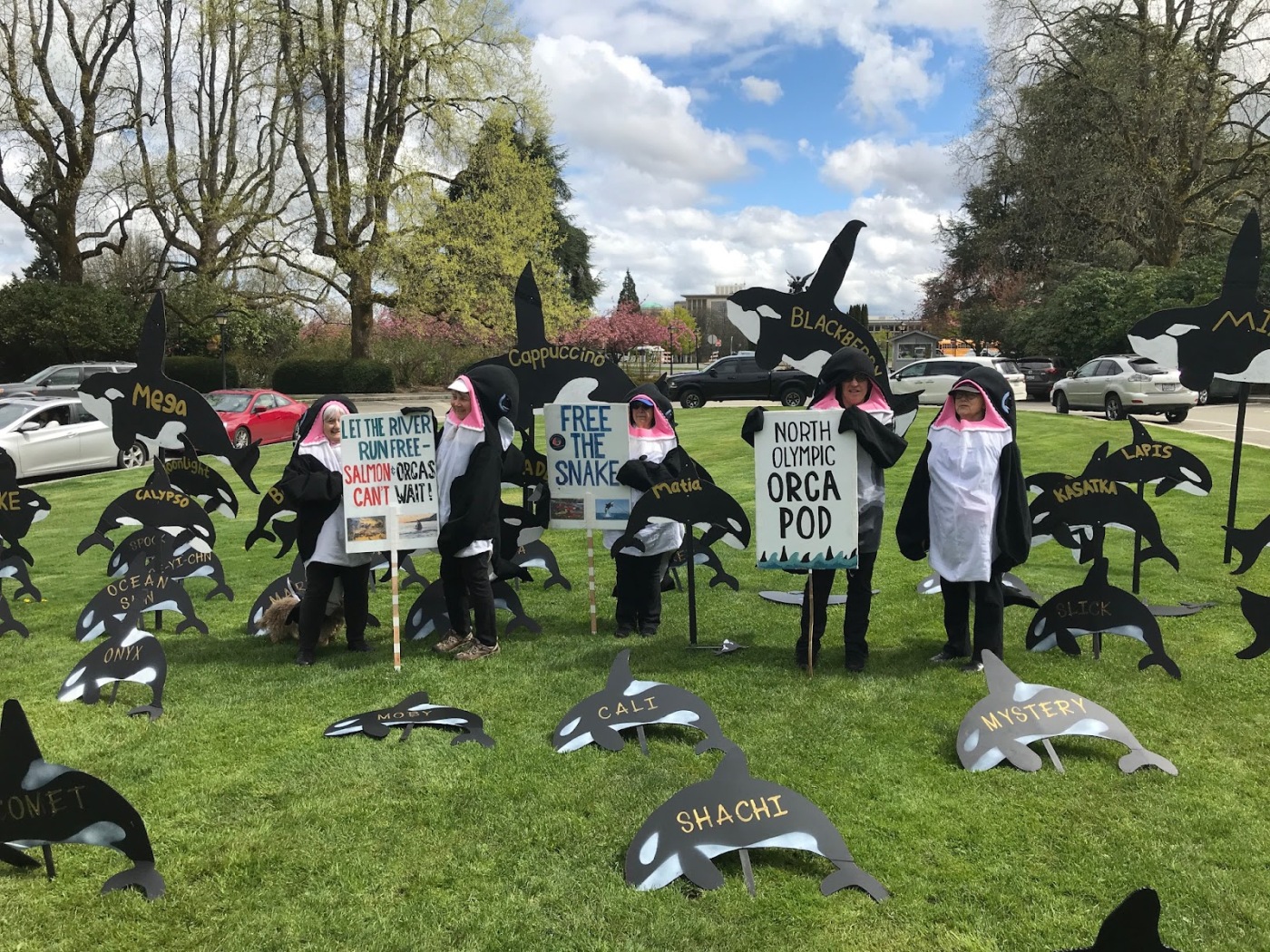 The North Olympic Orca Pod (NOOP) are a group of concerned individuals from the North Olympic Peninsula who are working to spread awareness about the plight of Southern Resident orcas. “NOOP celebrates our social, intelligent, and amazing resident orcas, shows challenges they face, and inspires people to help our local orcas thrive.” Three of their members, Debra Ellers, Kathrine Jensen, and Jayne Marek discussed their past years of advocacy work and what needs to be done moving forward to help Southern Residents. The NOOP members are known throughout the region for their advocacy work and their unique way of going about it, donning orca costumes, and taking direct actions such as die-ins at Representative Kilmer’s office to occupying Governor Inslee’s as well as doing general educational work in the area. The Pod’s goal is to educate, advocate, and bring attention to orcas in a number of creative ways. They have around 15 core “orca” (members), who each represent a chosen orca from the Southern Resident pods. All three of the members moved to Port Townsend in the last twenty years from all over the country and met, forming the group after Debra and Kathrine took a shared Whale Naturalist Course.

Debra is originally from Virginia where she grew up on her family’s farm. She later moved to Idaho where she worked as a business attorney from the 1980s until her retirement in 2016. While in Idaho she experienced the state’s beautiful outdoors and fell in love with every aspect of it. As an avid hiker, she spent much of her time outside where she witnessed pristine streams throughout the countryside that were lacking salmon. She began to learn about what happened to the Snake River Salmon and was thrust into work to restore Chinook populations through dam breaching. When she moved to Port Townsend, WA in 2016 she had felt burned out after seeing so little progress on the lower Snake River dams over the previous two decades. But Debra was thrust back into the work when hearing from orca experts like Ken Balcomb that the primary problem for Southern Resident orca was their lack of salmon and that breaching the dams was the best—and possibly only—way to save them.

Katherine moved to Port Townsend from California in 2004. She joined Port Townsend’s Marine Science Center, becoming an active member where she maintained the aquarium, fed the critters, and worked to keep it clean. After having the honor of working with a donated Orca skeleton from the National Oceanic and Atmospheric Administration, she was hooked and immediately started to work on the issue of orca’s endangerment. She says that now in her work in NOOP, she looks for any “opportunities to put [the Orca] suit on and talk about orcas.”

Jayne originally lived in the midwest, where her only familiarity with orcas was about their captivity, such as at SeaWorld. Since she moved to Port Townsend, she has taken every opportunity to be on the water, appreciating the differences between the outdoors in the Midwest and that in Washington. After going whale watching and seeing them in person for the first time, she became aware of the things that are causing problems for them. Jayne stresses how important it is to be in contact with one’s legislators and be educated on this topic.

The Podmates have worked closely with local tribes and have spoken at the Nez Perce tribal members’ Environmental Summit several times. When discussing the dams themselves, Pod members point to how necessary it is to breach the dams as soon as possible. Debra clearly states that the concerns with dam breaching, whether it be from irrigators or those concerned about electricity, can be easily mitigated through other means and that the dams will not have the adverse economic impact that many fear.