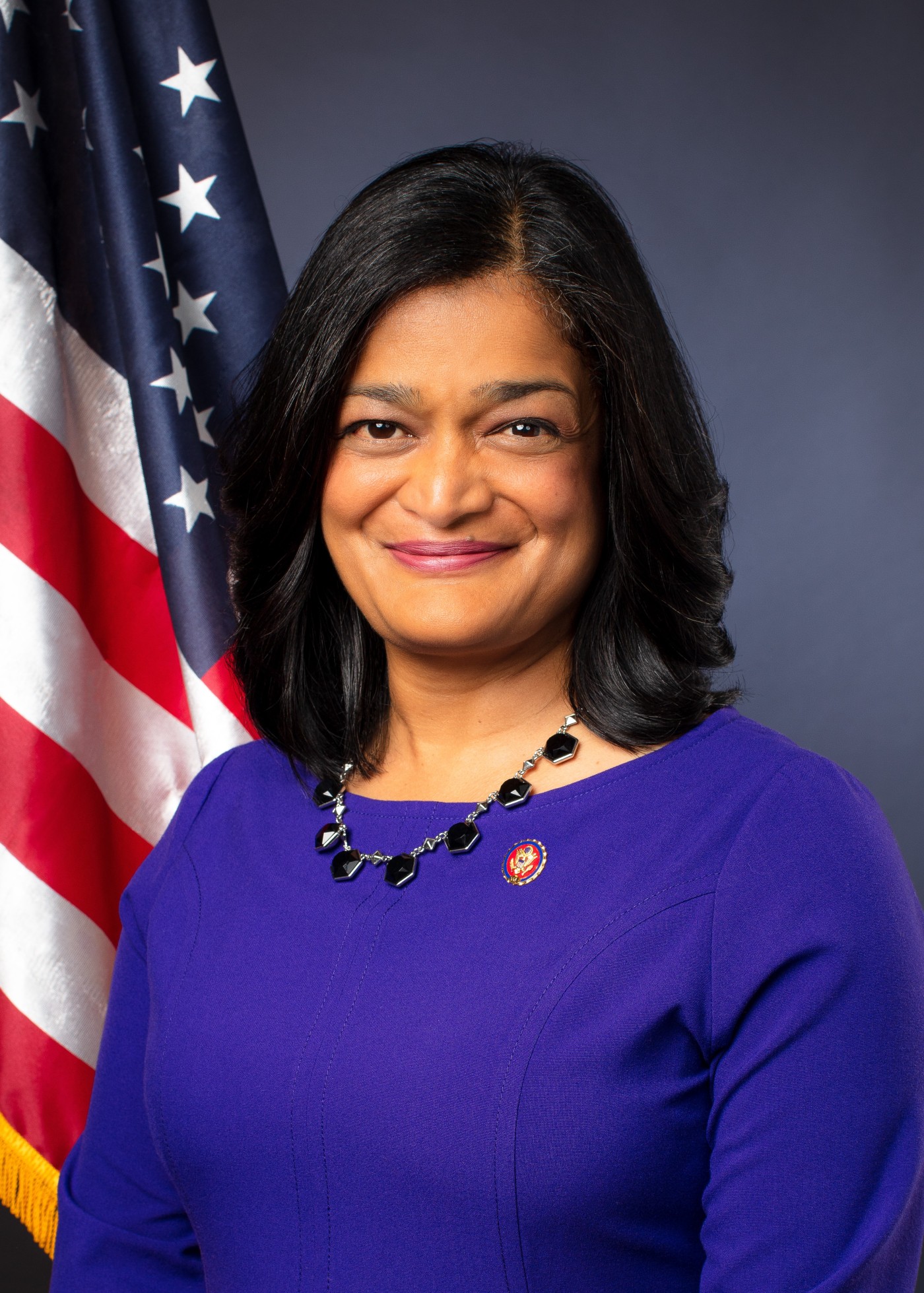 A former Washington State Senator and a lifelong organizer for immigrant, civil, and human rights, Representative Pramila Jayapal was recently re-elected to Congress for a third term with more votes than any Member of the House of Representatives. In 2016,she became the first South Asian American woman ever elected to the House. She came to the United States alone at the age of 16, and went on to start the largest immigrant rights organization in Washington state before becoming one of only 14 immigrants serving in Congress today. As the Chair of the Congressional Progressive Caucus, Representative Jayapal is the lead sponsor of the Climate Resilience Workforce Act, Medicare for All Act, the College for All Act, the Housing is a Human Right Act, the Ultra-Millionaire Tax Act, and the Roadmap to Freedom immigration resolution. She currently serves on the Judiciary, Budget, and Education and Labor committees. Congresswoman Jayapal lives in West Seattle with her husband Steve and her labradoodle, Otis.

The Puget Sound region’s unique water-based way of life has been shaped by our stewardship of the environment. Southern resident orcas and salmon are an integral part of our history, cultures, and daily lives. Both salmon and orca preserve biodiversity and play an essential part in the maintenance of marine ecosystems. The Representative is deeply concerned about the impact of climate change on the health of Southern resident orcas and salmon. The past seven years were the hottest on record and rising water temperatures threaten the survival of both species. Climate change is here and now. It is time to make meaningful investments into climate action before it is too late for our salmon and Southern resident orca.

Since coming to Congress, the Representative has been advocating for the protection of our salmon, Southern resident orca, and our environment on the national stage. Specific to this issue, she recognizes the significant impact the Lower Snake River Dams have on the Pacific Northwest and supports efforts to reimagine the Columbia River Basin to both serve our communities and protect our region’s biodiversity. While the Lower Snake River Dams are not located in Washington’s 7th Congressional District, she understands the impact that these dams have on our region as a whole including the effects on native salmon and orca populations, energy production, and regional tribal communities. It is her conviction that a transparent process that allows all impacted stakeholders to have a voice is necessary to determine a path forward.

That is why, in April if 2018, the Representative voted against H.R. 3144, which was introduced by Representative Cathy McMorris Rodgers. If enacted, this legislation would have prevented an environmental impact statement from being conducted on the Columbia and Snake River systems in an open and transparent process. Furthermore, this bill would have circumvented judicial precedent and fundamental environmental laws to forcibly mandate an inadequate salmon recovery plan for the Pacific Northwest. Recognizing that this issue is one of regional importance, Representative Jayapal has been grateful for the leadership of statewide officials such as Governor Jay Inslee and U.S. Senator Patty Murray who are pursuing a joint federal-state process to determine a solution. The Congresswoman is supporting their plan calls for regional input from a diverse group of stakeholders to weigh the benefits of the dams against their environmental impacts.

Representative Jayapal is inspired by Environment Washington’s work to protect Washington’s clean water, clean air, and open spaces. She is committed to pushing for immediate and necessary climate action on the national stage to protect our salmon and Southern resident orcas. In January, she introduced the Climate Resilience Workforce Act. Her legislation makes bold investments in building a skilled workforce that is capable of preparing for and responding to the climate crisis while creating millions of jobs and centering communities who are disproportionately affected by the harms of climate change.

Salmon are a fundamental part of many local Indigenous and Tribal communities’ livelihoods and cultural identities. The Climate Resilience Workforce Act will center frontline communities in order to ensure that we can build systems to preserve essential regional species such as salmon and Southern resident orca. As an organizer and in Congress, the Representative has seen the power of fighting for what you believe in and she encourages you to continue this work. The time for bold climate action is now and it will take all of us working together to save our salmon, Southern resident orca, and our planet.